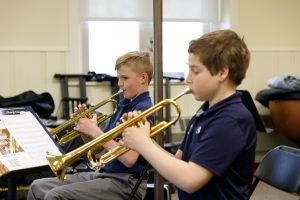 St. Aloysius Academy considers the arts vital to the education of the whole child; thus, music has always been a key component of the curriculum. We are known throughout the Archdiocese for our extensive and award-winning music program. Within this special setting, students develop fellowship, discipline and a cooperative spirit. Involvement in liturgy, general music classes, band and choir enables each boy to appreciate his own God-given talent, as well as the talents of others.

All students attend a weekly music class in the Music Center. Topics include music literacy, American and world music and other music fundamentals. Creativity is encouraged and supported through singing, playing, moving and composing. In addition, all students are introduced to keyboarding. 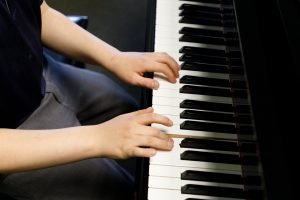 Piano Lessons – All students are encouraged to study basic piano skills. First grade students may begin private piano lessons in October with the consent of the classroom teacher and parent. First grade lessons are offered in pairs to build confidence. Private weekly lessons begin in second grade. Students perform in two piano recitals each year. It is strongly recommended that students have a piano or keyboard at home to practice.

When a student enters second grade, he may join the Cadet Band. During the first half of the school year, the student selects an instrument and gains proficiency through weekly lessons and Cadet Band rehearsals. The goal of the Cadet Band is to provide a positive learning environment where students can learn the basics of their new instruments within a group of other beginners. Once a student reaches a certain level, he may move to the Junior Band. Junior Band members are given lessons on a rotating schedule. The Junior Band performs in the Christmas Concert and the Spring Concert. 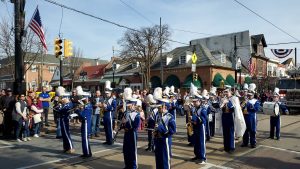 When a student reaches fifth grade and a specific level of competency, he joins the Senior Band. Lessons are given on a rotating schedule during the school day. The Senior Band performs at school functions, and when invited, to outside events. The Senior Band has performed at the Kimmel Center, Liberty One and the Wells Fargo Center in Philadelphia, Baltimore’s Inner Harbor, and the Empire State Building and on the plaza of the Lincoln Center in New York City.

Students enrolled in the Senior Band are eligible to audition to be in this select group. Jazz Band rehearses before school. The Jazz Band performs at important school functions and in local jazz competitions including the annual St. Aloysius Academy Jazz Festival.

This ensemble is comprised of students who want to play percussion instruments in a group setting. The Percussion Ensemble is featured during concerts and performs at percussion competitions. They have performed at Citizens Bank Park and Wells Fargo Center. A dedicated percussion instructor rehearses with the students before school.

Our String Ensemble is often featured at monthly Mass and other Academy events. Our ensemble includes violin, viola and cello players.

Band members in fourth through eighth grades may audition for these select groups. Students who are chosen practice and perform with other talented music students from all over the Archdiocese of Philadelphia. Auditions and the practices for those very accomplished bands are held at Archdiocesan high schools. Many of our students merit participation at the Archdiocesan Concert of Excellence at the Kimmel Center. 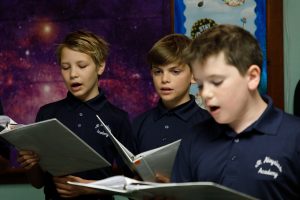 Students in third and fourth grades participate in choir and rehearse once per week during the school day. Students in fifth through eighth grades may participate in the Middle School Choir. This Choir rehearses before school. Performances include liturgies, Christmas Reflection, the Spring Concert and the Spring Show. The Choirs also performs at outside events such as singing at the Rotunda at the Pennsylvania Capital Building in Harrisburg and Wells Fargo Center in Philadelphia.

Choral students at the Elementary and Middle School levels may perform in this select group. Students who are chosen for these groups sing with other talented choral students from all over the Archdiocese.

There is a Music Scholarship available to new students with musical talent entering fourth, fifth and sixth grades.

St Aloysius Academy offers boys the opportunities to have it all.  They are scholars, athletes, artists, singers, dancers, and musicians.